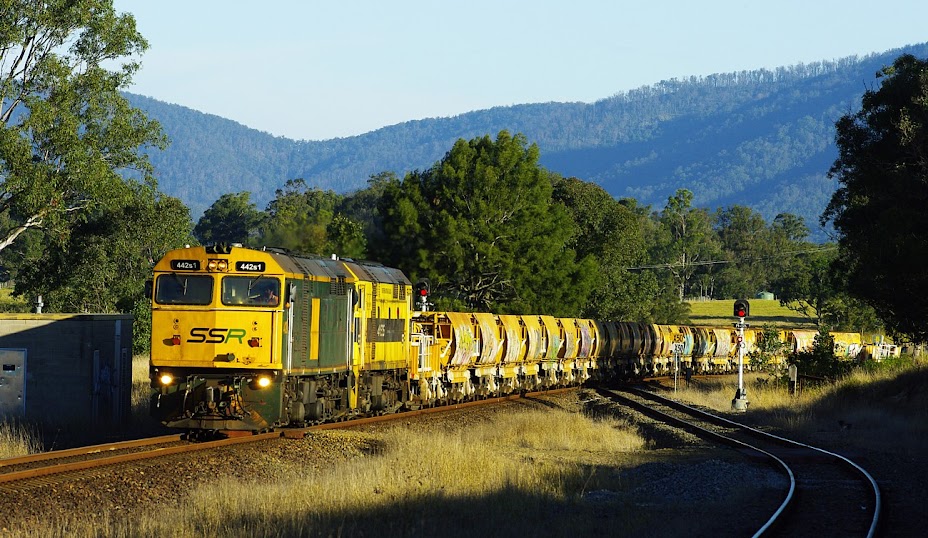 I was just going through some Photo's on my PC from back in 2018 and come across this file I had made up of my modelling efforts to create this VLDX Model. I can't even remember why I chose not to share it on my blog at the time. Anyway here it is.

I only have the On Track Models representations of these Victorian Vans, so when looking at options to make up one of the VLDX vans, I chose to use parts from On Track Models 2nd version of the VLCX to kit Bash a VLDX. I see this van as the most closely related in Construction.

I am no expert on Victorian Vans but from what I can work out, The Victorian Railways constructed 20 of these 52 foot long VLDX Lourved Vans. I believe they were made for a pacific haulage contract at the time. This is why they have an unusual length. Up till this time they had only built Vans in this series as 40 footers and 56 footers.

I have noticed these vans as part of consist on trains passing Taree in the early 90's, but never got up close and personal with a VLDX. So I have had to make a number of guesses on how these are constructed. I am very thankful of people like Norm Bray for his Flickr Site Norm Bray | Flickr that has many photographs of rolling stock for those that really missed out on getting photo's of wagons while they were running. He has given permission for me to use his photo's to explain my modelling process.

My aim for this project is to make the model as closely as OTM's have produced their Victorian Vans. So it looks like it may of come out of one of their boxes originally. 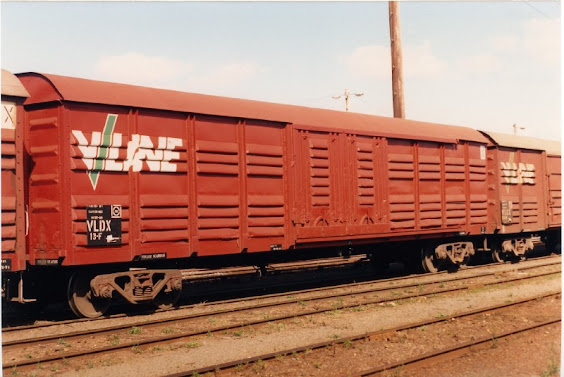 What makes these vans unusual is the length and the doors which only roll to the right on each side. This in a way makes it relate more to the VLCX Van rather than the VLEX Van. I also lacks the extra pressing on the side panels that the VLEX has. 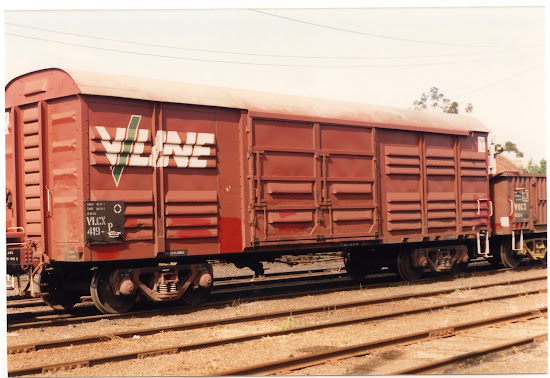 The second version of the VLCX is what I can see as being the mostly closely related Van in it's general construction. I have used the On Track Models version of this van to construct my VLDX. The side panels on the 3 panel end are the same (H beams between the panels) The Ends are the same, the roof has the same profile and panel size. Going off the fact that these have a steel floor and not timber like the first version of the VLCX, I have used a steel floor on the VLDX. 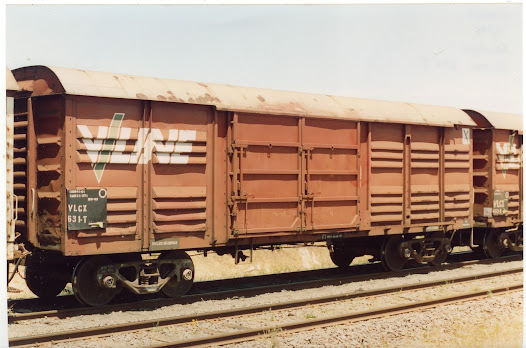 When you look at the first version VLCX, it is quite a bit different. The ends are different at the base around the coupler area. The side bracing is very different and the top door runner is different. This also has a timber flooring. It is well presented by the OTM's version of this. 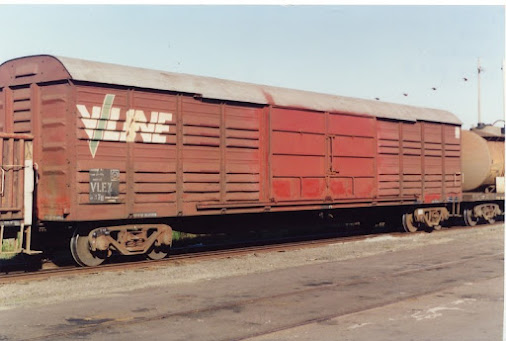 VLEX 837
The VLEX is a different beast. It gains it's extra 4 feet (52 vers 56 feet) by using larger doors. It also has extra pressing in the sides. In some ways it might of made sense to use parts from the OTM's VLEX to make the VLDX but I viewed the pressing as just too hard to remove and still look good. The pressing at the top maybe, but the ones between the louvres, not so.
Anyway to the model 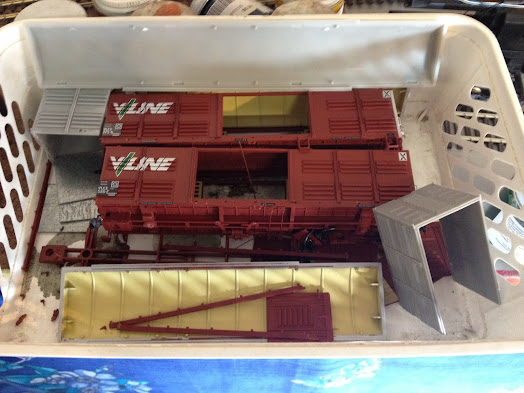 It started life here from my parts box.
I had quite a bit of stuff to use as I had acquired some pre-production stuff from OTM's which become very useful. One that was very useful was a couple of pre-production VLCX bodies that had removable brass plates for the number boards. On the production run the number boards were put on the die and not a separate part. This was useful as the VLCX had the number board at the ends were the VLDX mostly had them placed in the centre of the Louvres. 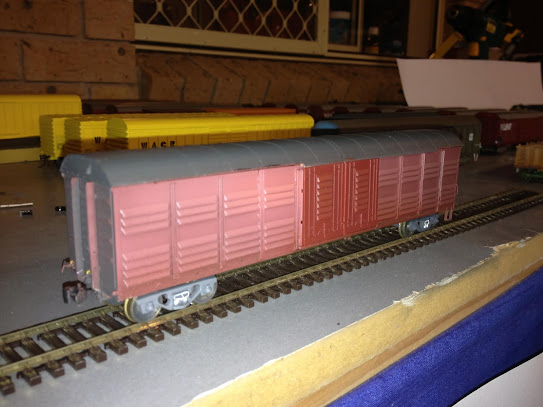 For some reason I didn't take photo's of the construction of this model or I cannot find them. 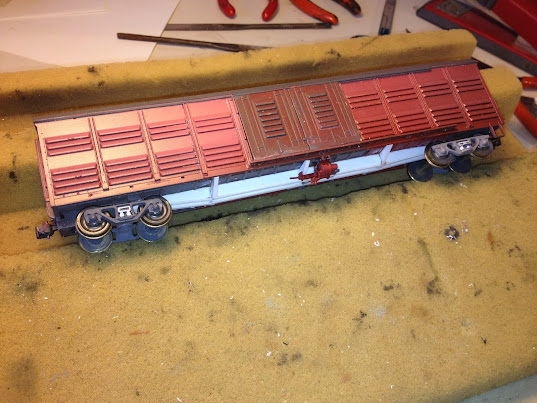 Of note in this photo is the under frame. The fish belly is quite a bit shallower than the VLEX Van. As a guess I have made it the same size as the first version of the Victorian ELX/VOBX open wagon. it makes sense to me that they might share the same dimensions as such. I measured up an Austrain's model to match it. 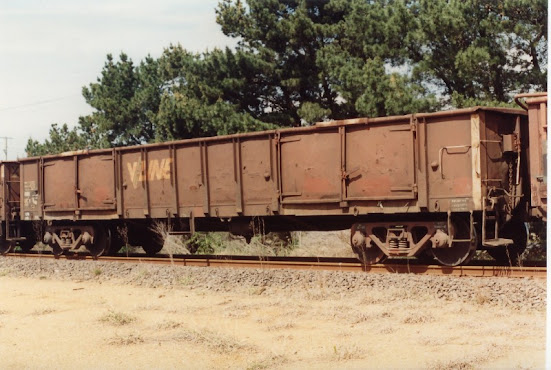 An example of a shallow under frame

On other plus from the pre-production models were the use of real chain for the hand brake. All the parts except the under frame constructed from styrene are OTM's. The brake detail is done based on the 2nd version VLCX. I have used photo's to pin point the location as close as I can tell. I had to use the doors from two wagons as they are different on each side of the VLCX. One set rolls left, the other set rolls right. One the VLDX they both sides roll to the right.

The roof is interesting. The panels on the roof as the same size as that on the VLCX. but to make them fit on the 52 foot VLDX they have this short panel in the center of the van. This made thing easy for adding the roof to this build. I used the door end of two roofs and then cut off the remaining door runners to suit. I was real happy when doing this as I finished up with a short panel in the middle about the same size. Maybe a fraction too big but it doesn't look out of place. Some satisfaction came when I could get the doors to open and close.

Side on difference between the VLEX and VLDX

I added the interior load barriers from a VLEX model.
Some various photo's from Norm Bray's Site 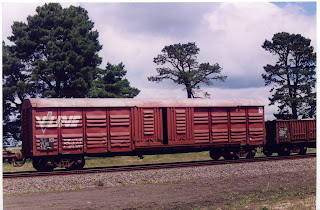 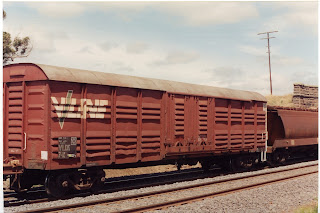 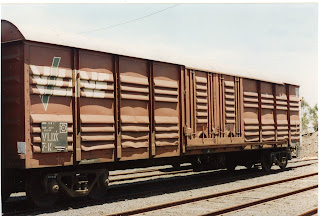 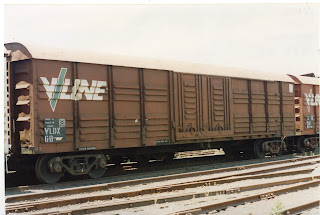 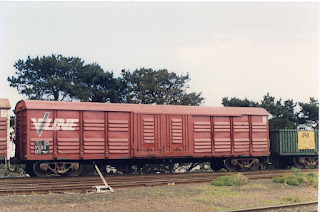 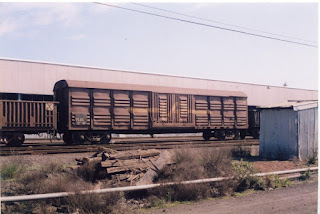 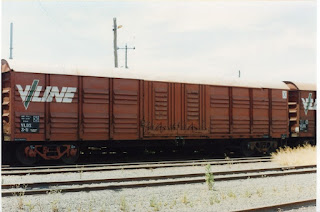 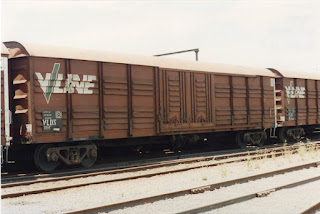 I picked VLDX 7 to model as it had a silver roof. Most had red roofs for some reason which really did set them apart from the VLCX/VLEX. I like the silver roofs and I already have one VLEX with a red roof so silver it was.
Anyway that the model. It was quite an effort 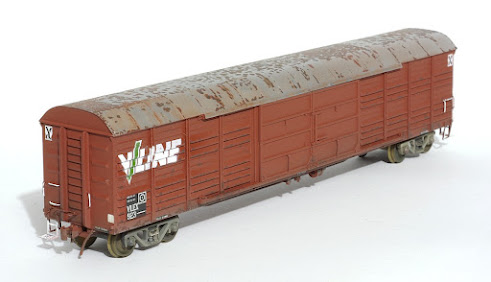 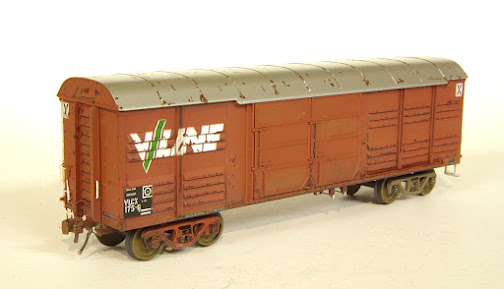